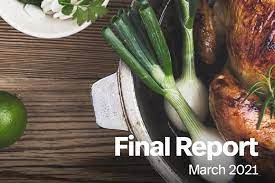 + Commitment to working with the devolved administrations

– No assurance that imports will meet UK animal welfare standards

– No signs of conditionality or equivalence for tariffs

– Continuing lack of transparency around negotiations

The Trade & Animal Welfare Coalition is pleased that the Government’s response to the Trade and Agriculture Commission (TAC) report reiterated its commitment to upholding animal welfare standards, however the group’s ongoing concern is that there still has not been an assurance that imports will meet UK animal welfare standards and there is a continuing lack of transparency over how negotiations will be shaped.

Whilst recognising that the newly appointed Kate Rowell from Quality Meat Scotland is a veterinary surgeon as is Robert Anderson, a past president of the Scottish Branch British Veterinary Association, TAWC is disappointed that there are no specific animal welfare experts on the newly formed TAC and that the voice of our sector has not been included. Whilst the Government has set out a much welcomed ambition to take the lead on welfare through international bodies like the World Organisation for Animal Health and the WTO, it has failed to delivered any sort of formal mechanism that enables the expertise of key stakeholders to be heard and to form part of the Government’s approach to shaping trade.

Additionally, there is little commitment to establish the core standards on which we should base our free trade agreements and where we can ensure animal welfare standards are protected. As it stands, we have two significant deals in Australia and New Zealand that have been agreed in principle and which leave the UK market open to the potential of lower welfare imports. The Government has failed to send the message internationally that any food imports are of an equivalent or higher welfare standard than our own. These core standards are very important and both our members, other NGOs and MPs have been calling for these to be set out.

TAWC does welcome the commitment that DIT and Defra will work in partnership with the devolved administrations and industry to develop an Export Council and agree its remit and membership and sees this as a forum where standards can be agreed collectively and driven upwards. This will only work if the Government aligns its domestic and trade policies around its animal welfare, sustainability and environmental ambitions and moves this beyond positive words to clear action and the inclusion of wider experts can make this happen.

David Bowles, Chair of TAWC said “Whilst we welcome free trade deals, we do not want to see the UK allow in products produced under lower welfare standards to the UK, undercutting our farmers and our high animal welfare standards. We fear that the Australia deal rather than being a model contains provisions that could be used as a back door route to undermine protections in areas such as beef and sheep. Manifesto commitments from the Government are not enough – we need to see this happening in practice”.

We look forward to seeing the next piece of work to come from the new TAC and to understanding how the Government will use the advice from that Commission to shape its policy on animal welfare.