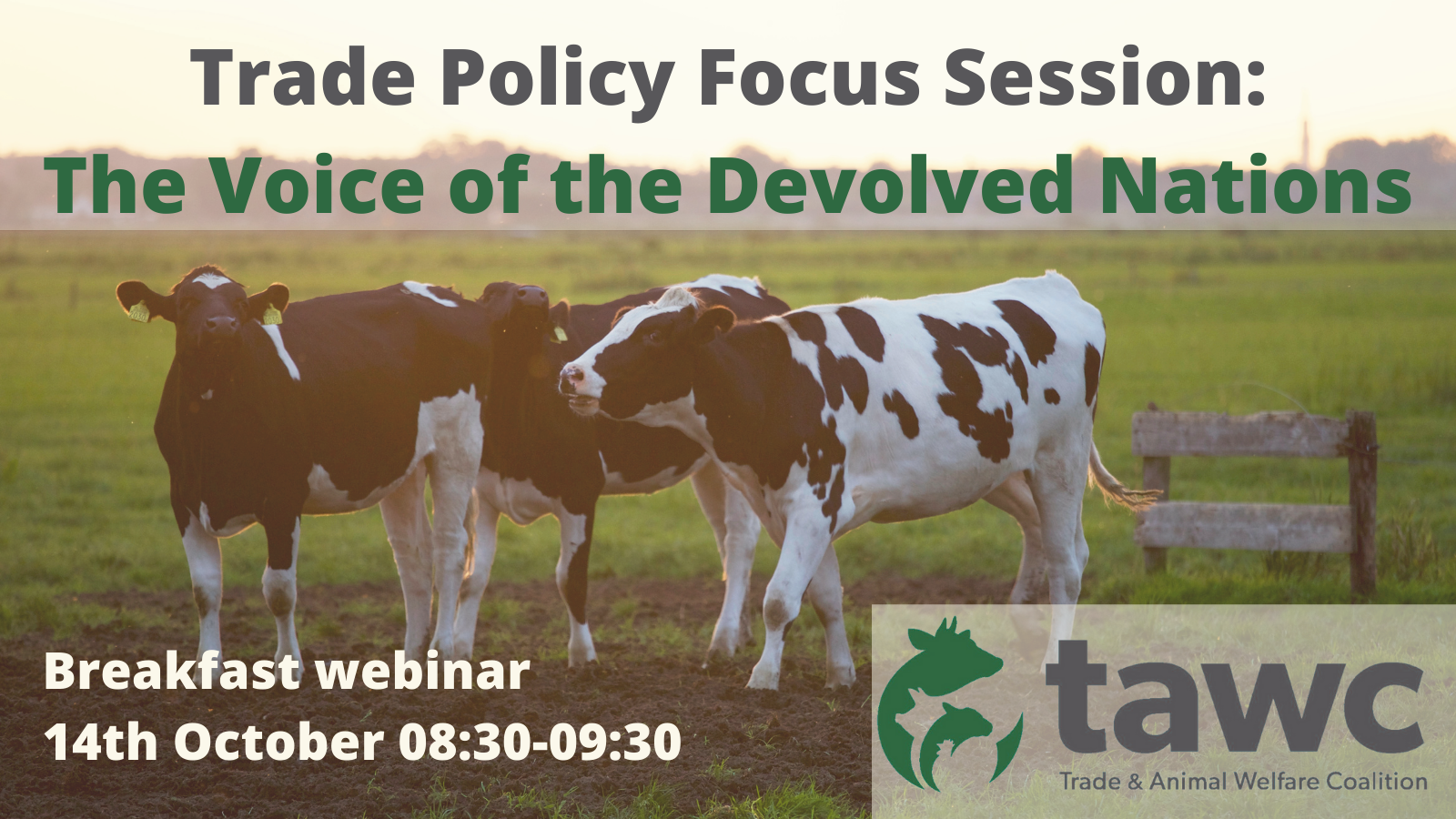 Trade Policy Focus Session: The Voice of the Devolved Nations

The Trade & Animal Welfare Coalition held a discussion forum for elected members from the devolved nations joined by farmer representatives, business, academic and welfare organisations to discuss how free trade agreements (FTAs) could impact devolution, what impact there could be on improving animal welfare standards and how the UK’s nations could cooperate to improve animal welfare, and foster more sustainable food systems.

During the webinar, speakers stressed the growing importance of animal welfare for consumers across the UK, and the significant role of animal welfare in achieving sustainable trade. Devolved nations all have animal welfare as a high priority with various policy developments currently at different stages to raise standards including the ban on live exports, improving internal live transport, banning foie gras and ending cages for pigs and laying hens.

Devolution within the UK means each part of the UK has broad competences to regulate goods and services and methods of production. The Internal Market Act was put in place to ensure free trade within the UK internal market following Brexit. In relation to goods, the Act introduces two market access principles:

The Act does not invalidate any laws in any part of the UK but it does render them of no effect in relation to certain goods. This is important as any part of the UK can pass whatever legislation it wants but those goods can then come into that jurisdiction which undermine the standards within that legislation.

Speakers raised the concern that the Act could have a freezing effect in keeping the same laws for animal welfare  related to goods in place as it would be difficult for any part of the UK to increase animal welfare standards while others could simply choose to comply with lower standards  elsewhere  in the UK. The Act envisages common frameworks where agreements happen on a UK basis and any changes are agreed collectively. The session recognised that cooperation between the different parts of the UK on animal welfare will be very important. It was therefore agreed that pressure should be placed on the UK Government to get better coordination between the four devolved Governments when developing animal standards to understand what the overall objectives are for moving forward.  Such high level objectives would be agreed at a UK-wide level. This would require a new cooperation mechanism with the meaningful inclusion of politicians from the different legislative bodies and Parliaments in the UK so there can be unity of approach.  The session participants felt that other stakeholders, such as veterinarians, farming bodies and non-governmental organisations who will be impacted by any changes, needed a better route into elected officials to voice concerns or submit information before any changes occur.

On the dichotomy between a reserved issue, trade and its impact on a devolved issue, animal welfare, the session felt that the scrutiny process for trade deals under CRaG is a huge problem for animal welfare and environmental standards as negotiating mandates are very vague, the Westminster Parliament cannot stop any trade deals once they have been agreed and devolved legislative bodies have no say in them at all. So any consultation that happens on them is quite meaningless.

The session agreed the following actions are needed to avoid the freezing of standards and deliver transparency and effective scrutiny of trade deals:

You can watch the one hour session here